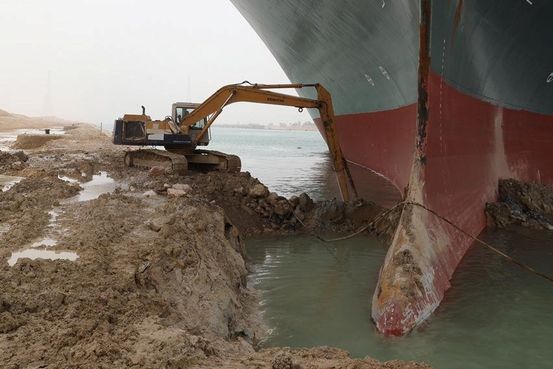 The Suez Canal remained shut Thursday as Egyptian authorities worked to clear a ship blocking the critical waterway and shipping experts warned a resumption of traffic through the channel could still be days, if not weeks, away.

The canal, which connects markets from Europe to Asia, is a transit point for oil products refined in Europe and crude oil from North African and Black Sea ports. Exporters and customers on both continents were girding for delays.

Singapore’s transport minister told port authorities to prepare for disruptions. “Some draw down on inventories will become necessary” if the blockage is prolonged, Ong Ye Kung said in a Facebook post Thursday. Ducati Motor Holding said some customers of its high-end motorcycles, built at a Bologna, Italy, plant, probably won’t get their bikes on time.

Tugboats and a dredger resumed work early Thursday to dig out the Ever Given—a 1,300-foot ship operated by Taiwan-based Evergreen Group—partially refloat it and move it out of the way. As the day progressed, people involved in the operation described an increasingly tricky engineering and logistics challenge.

The bow of the ship is still wedged deep into one side of the canal, requiring dredging, these people said. The ship needs to be lightened by taking off fuel, ballast water and, possibly, a portion of its container cargo. With no cranes high enough along the stretch of canal where the ship is marooned, helicopters are the only option. Officials are hoping a higher-than-normal tide expected over the weekend could help lift the ship free.