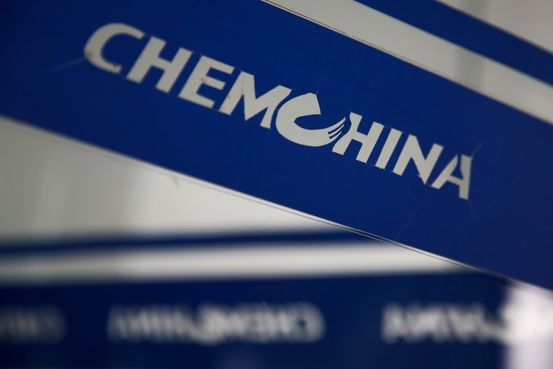 China approved a merger between the country’s top two chemical companies, paving the way for another supersize state-run enterprise that Beijing hopes will become a dominant global player.

Sinochem Group Co. and China National Chemical Corp., also known as ChemChina, will be placed under a new holding company funded and overseen by a government body that holds state enterprises, according to a Sinochem statement Wednesday, confirming a Wall Street Journal article in December. The Chinese body, called the State-Owned Assets Supervision and Administration Commission controls both enterprises.

The combination, which has been in the cards for years, would minimize competition between the two companies and create the world’s largest chemicals conglomerate with around 1 trillion yuan in annual revenue, equivalent to about $153 billion. The new holding-company structure was designed to avoid triggering a U.S. national-security review of Sinochem’s ownership of Swiss agro-giant Syngenta AG, the Journal reported.

Sinochem acquired Syngenta in 2017 for $43 billion. The deal for the seed company remains China’s biggest foreign acquisition and received regulatory clearance in more than 20 jurisdictions. The acquisition was approved in 2016 by the Committee on Foreign Investment in the U.S., a powerful interagency panel that reviews cross-border deals for national-security concerns.

Any change in ownership of Syngenta would trigger a review by the panel, Cfius, people familiar with the matter previously told the Journal. The panel has stepped up scrutiny of deals involving foreign investors in recent years amid heightened political concerns that China could acquire strategic U.S. technology through business acquisitions by Chinese companies.